Simply scroll through this page for the latest news, and for links to books where you can find my published stories.
You can also read some of my short stories for free; just hover over the STORIES tab.
​Serial murder, a burglar with a conscience, resolution, revelation and more wait for you...
If you are a writer looking for tips and ideas, check out the Blog and Beta Reading pages too!

Can you imagine a future utopia or dystopia?

Along with several other authors (including two from Aussie Speculative Fiction), my story about an imaginary utopian workspace has been a stimulus for artists; in my case, Susan Lincoln takes the story to another level. Head to artisan, Brisbane for the Dystopia/Utopia:2070 exhibition, running from 29 May – 17 July 21. Read my story here!​
Feel like having your heart broken in a good way? Check out my new short story, "Full Circle", where a young woman finds meaning after loss.

First published on nickmarone.com on 11th August 2020
As one of my fellow authors contributing to the Deadset Press anthology, "Journeys", Nick kindly invited me to answer some questions about my story and writing life.
Tell me a little about yourself. Where are you from/where are you based?
I’ve lived mostly in Manchester and Cheshire, England, and moved to Melbourne, Australia, in 2008. I live with my partner and an old Boxer dog which we adopted a few months after we said goodbye to our first girl.
What drew you to writing speculative fiction?
I have always been drawn to the dark and the dystopian which gives me free reign to explore the shadow side of our psyches. Sci-fi is a wonderful opportunity to use a little of what we know now and to let it fly into the future or alternative realities. I enjoy the challenge of weaving science or psychology into a story, for instance, whilst still making it believable with character and setting.
What other stories have you published? What projects are you working on?
I am happy to say that I have eight stories published in joint anthologies, other than Journeys. I say “happy” as it doesn’t feel so long ago that I got my first story published following the Atlantis Short Story Contest and realised that I didn’t want to stop writing.

In terms of projects, I have the beginnings of a novel in a digitally dusty folder which I know I will get to work on again. It is a psychological thriller about the relationship and individual journeys of a psychiatrist and a patient, one with a repressed memory and the other with a dissociative amnesia. However, I enjoy the buzz of writing, submitting (and occasionally being accepted!) so much that it makes sitting down and being disciplined to work on the novel rather a task.
What genres/topics do you like to write about, and why?
That is such a hard question. I enjoy writing across a number of genres – sci-fi, dystopia, horror, literary and psychological thrillers. The literary genre is a chance to slow down, to deliberate over every word and phrase in quite a different headspace from writing any other genre, so it is fun for the writer; the difference is also that readers who enjoy that genre will embrace those sometimes experimental styles of writing. Of course, horror is fun in a different way. Who doesn’t enjoy writing a scene where there’s axe-wielding and bloodlust? Or even just something creepy or unnerving? Please see above about what drew me to speculative fiction.
Are you a plotter, pantser, or something in between?
I begin as a pantser. I like to keep a note (Google Keep) of interesting words, phrases or thoughts. Sometimes I can use these as a foundation to build a story. If not, a period of mulling, such as during a walk, will usually do the trick and a story will form. Plotting is something I have not yet needed to do too much of, though I can see I will need to use this technique to get my novel moving
What authors or stories would you say have influenced or inspired your writing?
This is so hard! Like most if not all writers, I read fairly regularly. However, I must mention Ian McEwan’s Nutshell. This story is written in first person from the point of view of a foetus. Yes, that’s right. And the foetus has total consciousness, personality and intelligence. I read it in 2017 and I was so inspired by the brazenness of his idea and its execution that this was a huge catalyst in getting me started in writing, something I had not done since my childhood. In so many ways, the following are the first to spring to mind which have given me motivation or ideas for my own writing: Ender’s Game by Orson Scott Card, Brave New World by Aldous Huxley, Dirt Music by Tim Winton, Misery by Stephen King, The House of Sleep by Jonathan Coe, Great Apes by Will Self, and A Clockwork Orange by Anthony Burgess.​
Tell me about your writing space. Do you have a routine to your writing sessions?
I wish I had a routine. I write when I feel like it, which can be an hour or a few. My study is a bit gloomy so I tend to write on my laptop by a large window overlooking the front garden, or by our beautiful little wood-burning stove. The dog is usually somewhere nearby, though I wouldn’t go so far as to call her my muse.
What are your likes and dislikes regarding writing?
The ups: The excitement of a new project! The buzz of an acceptance. Having a reason to play about with my author’s website. Challenging staid thoughts about the world. Inspiration to learn about different things I would never have another reason to research, such as how one might make artificial gravity in space, or the molecular biology of viruses.
​
The downs: When there isn’t a project to work on, I feel like a raft at sea. Being stuck at 8,000 words and thinking I might have to start all over again. Not being able to give up the day job and write for money instead.
What moved you to write for the Journeys anthology?
It’s always exciting to be part of a joint anthology with other like-minded writers. For my story, “Lebensqualität”, future overpopulation and consequent scarcity of resources was the basis of my premise. One solution would be to identify and remove those deemed relatively useless to society, but doing it in a legal, albeit dictatorial fashion.
How did you think up your story for Journeys?
Once I decided on the theme of senicide, a grim folklore common to many countries, I had to imagine a sympathetic protagonist who would go through the journey from being a mature healthy adult to being summarily managed out of society (exactly how is left for the reader to decide). Sadly, I think senicide is also seen in today’s society, just in a more subtle form. She also has a journey of sorts in her relationship with her sons, from matriarchal to murderess.
What is/are your favourite story or stories in the anthology?
I am drawn to Kevin Klehr’s story, “The Game”. I’ve never read anything quite like it. The premise and the emotional tone are magnetic.

Books and audiobooks I'm enjoying - what are you into right now?
23/5/20 If you haven't listened to "Zero Day Code: End of Days, Book 1" by John Birmingham, you are in for a heart-thumping ride! Think of the catastrophic consequences of an international cyber war... with brilliant plot, characterisation and tension, a talented voice actor, Rupert Degas. Unbeatable. 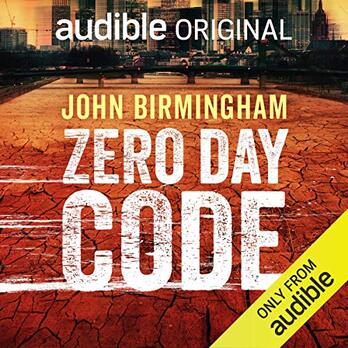 18/12/20  "Mother for Dinner" shows off the author's word play and clever characterisation, on a backdrop of brutal observations of human behaviour and humanity. In essence, this is a tongue-in-cheek mockery of thoughtless following of tradition and religion, slathered with black humour. Highly recommend if you have the appetite! 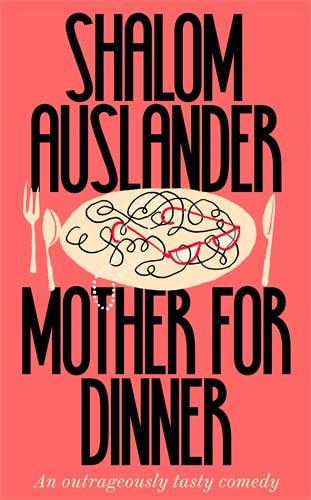 Incredibly beautiful illustrations accompany imaginative stories by writers united by a love of sci-fi and fantasy. Themes and characters will make you feel as if you are immersed in these unique worlds, and the stories will likely give you pause to ponder upon all things humanity and philosophy, If you feel like joining the ranks and pushing your boundaries, enter the long-running contest for free here! The latest collection of winning stories is available; just click the link below to purchase your very own copy.  @WritersOtf​ 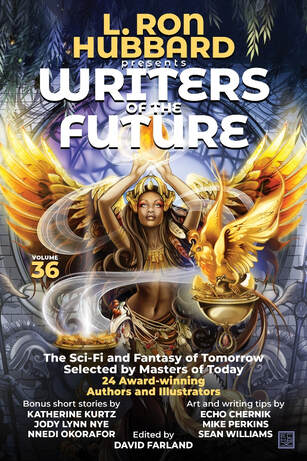 If you haven't listened to Children of Time, I highly recommend it. The audiobook version is addictive with excellent vocal narration by Mel Hudson, complementing perfectly Adrian Tchaikovsky's intelligent story of how the future might be for the final humans...and other creatures.  Guaranteed to take you to another dimension.  @aptshadow​ 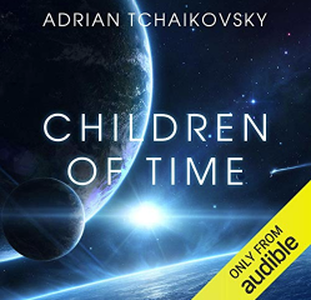 If you purchase through an affiliate link, I will receive a small fee -at no extra cost to you - which helps me keep the website running. But you are most welcome to purchase through other channels too.